Siberian Chiffchaff: On 13th December I paid a visit to the Wastewater Treatment Centre at Charmouth run by Wessex Water. As I was wandering around the pretty much smell-free and birdless site (a fairly modern pumping station) I got chatting to a couple of their operatives who, when I described the filter beds at Colyford WWT suggested I might like to try my luck birding at the Chideock sewage works. They described it as having above ground level filter beds, with public access all around and screened by mature trees. Chideock is a small village about 5 miles to the east of Charmouth and I had no idea until that conversation that it had its own Water Recycling Centre. So getting directions, I thought I'd give it a go. I found the place easily enough which was set in some interesting habitat, surrounded with a mature screen of coniferous trees, brambles, hedgerows and Alder trees. My first visit gave 2 Firecrests, maybe 15 or so Chiffchaffs, several Long tailed Tits, 2 or 3 Goldcrests and also a "pale and interesting" Chiffy. Bingo! Staggering. An absolute birding treasure-trove hidden away, off the beaten track. And I don't recollect ever seeing a birding report from this location before. Posting the highlights on the local Whatsapp group I was delighted to hear later that day that Gavin @NotQuiteScilly had quickly followed up the post and had re-found the latter. Hats off to Gavin for the work he's put in, reading round the problematic subject of Fenno-scandian and Siberian Chiffchaffs which he's described in his various blogs over the last few weeks.

So, although "not a 'classic' tristis", we think the little gem that I photographed today has been around since at least 13th December 2019 (see also Gavin's blog 17th December Here which contains photos and a description of how the bird responded to a 'tristis' song recording).

This morning was the first chance I've had to re-visit the location this year and I was not to be disappointed. As well as loads of Chiffchaffs, Long-tailed tits and Goldcrests, I also saw a Firecrest flitting about in the brambles. Best of all though, the "pale and interesting" Chiffy was still around. Never easy to photograph, the Sibe Chiffchaff was actively feeding on the plentiful supply of flying insects near the main vehicle entrance. Although very active, it did occasionally perch up for a few moments on the chain link fence, long enough for me to get these record shots: 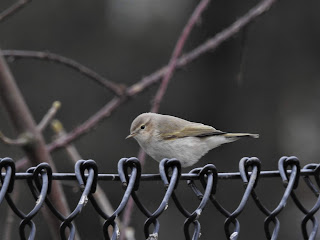 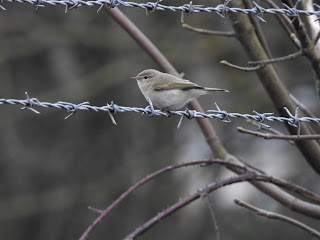 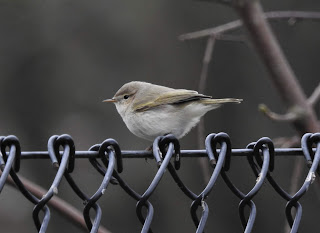 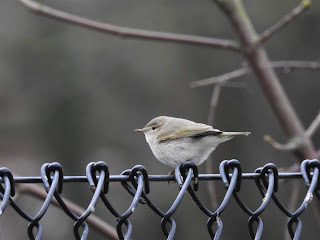 And under the same flat lighting conditions with the same camera settings here are some additional photos of  regular "collybita" Chiffchaffs for comparison. 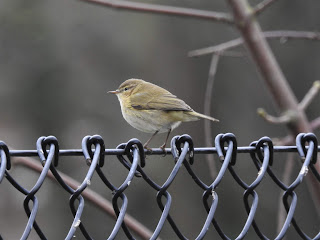 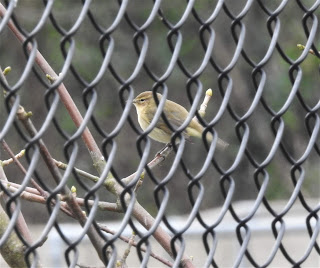 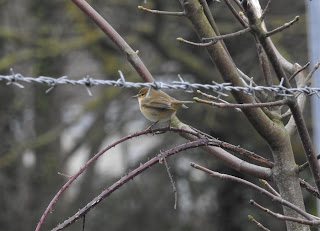 I'll be visiting the site again!

Posted by Charmouth Birding at 21:22