A cold morning (6 degrees) but feeling much colder with a wicked wind chill. Between the rain and sleet showers there were abundant flying insects around and within the treatment centre. Here's a (very) brief videoclip - this bush was jumping with Chiffchaffs as they searched for food. 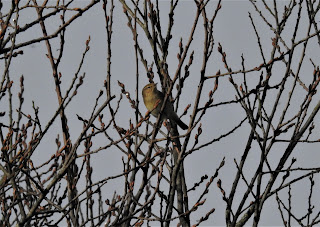 I spent a good hour patiently working through the Chiffs and Goldcrests until I found this pale beauty which in the field, stood out from the crowd exhibiting enough of the classic Tristis features for me to be happy enough with my ID to run it by the members of the local Whatsapp group:

The bird was actively feeding above me in small trees and much of the time against a bright sky. Note the classic black legs and bill, which show up much better here in the photos than I noticed in the field. 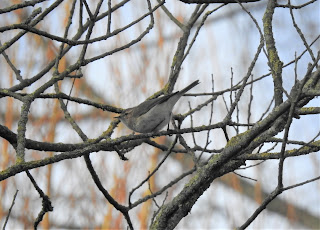 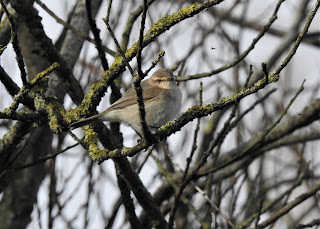 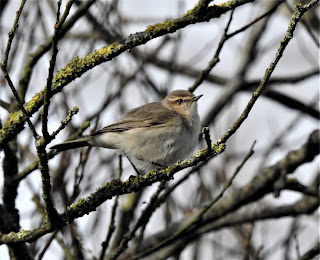 Shouldn't be greedy but it would have been nice to hear it call too but it remained silent while I was there.

An enjoyable and rewarding morning. Now what shall I do in the afternoon I thought. Answer a quick snack, a hot drink and then a bit of gulling.

I drove to Coronation Corner, parked up next to the River Axe and was just about to starting eating my lunch when Gavin tapped the window and said that he'd just found a Caspian Gull. (I hadn't been paying attention to the Whatsapp group so having missed several Axe Caspian Gulls before, this was very fortunate timing). Gav wondered how I'd arrived so quickly after he'd sent his post!! Lucky timing! The day was just about to get even better.

Most of my early birding was in an inland, land-locked county. Have to say that in common with quite few Birders I still do not find Gulls easy even though I've been trying hard to catch up. So my thanks to Gav for pointing me at my first confirmed Caspian Gull and for talking me through the key features. Just got to go and try to find my own Casp now ... with emphasis on the trying. Have to give it a go.  We'll see!!

By the way, he also picked out (and got me onto) a 2w Yellow legged Gull which dropped in briefly. What a pro !
Posted by Charmouth Birding at 22:37